The role of neutron science in securing a sustainable future

Climate change is one of the greatest environmental crises the world has ever faced. With global temperatures on the rise, extreme weather and climate-related events are becoming increasingly frequent and intense, placing lives and livelihoods at risk.

Join us for a themed LENS webinar, coinciding with the 26th UN Climate Change Conference (COP26), to find out how neutron scattering techniques are being applied in energy, materials, and environment research to help reduce our impact on the global climate.

Webinar moderator, Professor Robert McGreevy, will open the webinar with a short overview of the LENS Initiative and the role of neutron scattering in working towards sustainable development goals.

The current climate change requires a global action, to which all sectors of society should contribute. Scientific progress provides us with powerful means to understand the physics behind the climate change, to predict the effects on our world and society, and to develop new technologies that would allow reducing the energetic footprint of humankind.

In this hunt for novel technologies, neutrons are used by scientists to characterise new materials from the Angstrom to the centimetre scale. In particular, the capability of highlighting light elements such as hydrogen and lithium, their magnetic properties, as well as the high penetration of neutrons, make them a crucial tool for the research and development addressed to fight climate change.

This talk will provide an overview on the use of neutron scattering applied to energy production trough organic photovoltaics, energy conversion in fuel cells, and energy consumption in an everyday household application. The reported examples will show the power of neutron reflectometry, neutron radiography, and small-angle neutron scattering to reveal the properties of the investigated materials.

The Earth’s climate is a highly complex, kinetically controlled balance of components and conditions within the atmosphere, that we know has been adversely affected by human activities. In order to monitor changes and predict future effects, intricate models are used, which rely on accurate parameters to describe these components and their lifetimes. One important component is aerosols. These affect our climate through both direct scattering and absorption of solar radiation, and indirectly through acting as cloud condensation nuclei, which in turn effect cloud formation and precipitation.

Much of this aerosol contains an insoluble mineral dust core and has an organic film coating, from either natural or anthropogenic sources. This organic film influences the climatic effect of the aerosol particle. However, the atmosphere is highly oxidising and these organic films will react and become unstable. By comparing the rate of this process to the lifetime of aerosols in the atmosphere their importance in climate modelling can be determined.

In this talk I will give a brief introduction to atmospheric aerosols and show how we are using neutron reflectometry to investigate oxidation of these organic films by key atmospheric species.

Design and implementation of advanced polymer membrane formulations for selective transport of ions and molecular species are critical for creating the next generations of batteries, fuel cells and separation devices. It is necessary to understand the detailed transport mechanisms over time- and length-scales relevant to the device operation, both in laboratory models and in working systems under realistic operational conditions. Neutron scattering techniques, including imaging, diffraction, quasi-elastic and small angle neutron scattering are unique tools for research to design, evaluate and implement advanced membrane technologies for renewable energies.

Domestic and industrial refrigeration applications contribute a substantial part to mankinds energy consumption. New technologies based on solid state caloric effects, such as magnetocaloric, barocaloric, elastocaloric and electrocaloric effect, promise considerable efficiency gains as compared to today’s vapor compression technology. Within our research we aim for a better understanding of the relation between the material structure and dynamics to guide a sustainable material design.

In caloric materials, applied fields (e.g. magnetic, electric, pressure, strain) lead to changes in entropy and in the adiabatic temperature. The observed caloric effects form the basis of the caloric refrigeration cycles. We are interested in the fundamental mechanisms of these caloric effects, which are not yet fully understood. In particular, we studied the magnetocaloric effect in the family of compounds Mn5-xFexSi3.

Neutron scattering experiments were crucial for the elucidation of the magnetic and crystalline structures and for the distinction of Mn and Fe [1]. In addition, inelastic neutron scattering investigations revealed that the application of a magnetic field induces (suppresses) fluctuations in the materials. These fluctuations are closely related to the inverse (direct) magnetocaloric effect observed in these compounds [2]. 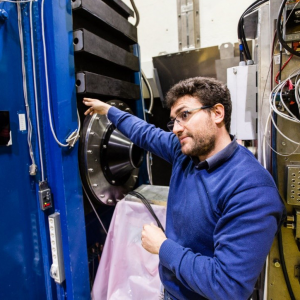 Leonardo Chiappisi is the current scientific coordinator of the Partnership of Soft Condensed Matter at the Institut Laue-Langevin. Born in Palermo, he graduated in Berlin at the Technische Universitaet Berlin, and moved to Grenoble for continues his research in soft matter science. He enjoys the European scientific environment of the ILL and the cutting-edge research he is in contact with.
His scientific interests are mostly focused on the preparation of complex functional systems from the spontaneous organisation of simple colloidal building blocks in aqueous solution and at interfaces, assembly processes, as well as the characterisation of the resulting structures and functionalities. 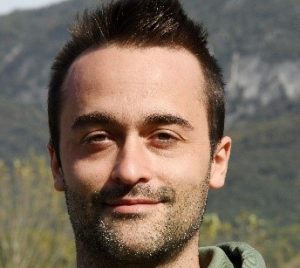 Quentin Berrod is a physico-chemist currently working at SyMMES in Grenoble, France. He is also co-responsible of the SHARP neutron spectrometer at ILL. He developed an expertise in soft matter characterisation from the molecular to the macroscopic scale. Quentin studies, in particular, the structural and dynamical properties of electrolytes for fuel cells and batteries (polymers, surfactants, ionic liquids) in bulk and under nanometric confinement. 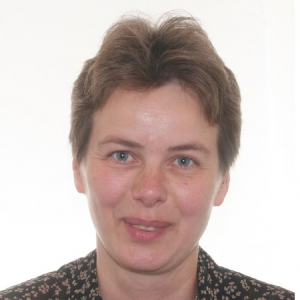 1997 – 2001: Postdoc at the Institute for Condensed Matter Physics,University of the Basque Country, Bilbao, Spain

– Single Crystal and Powder Diffraction at Laboratory, Synchrotron and Neutron Sources under Non-Ambient Conditions of Temperature and Pressure

This website uses cookies to improve your experience while you navigate through the website. Out of these, the cookies that are categorized as necessary are stored on your browser as they are essential for the working of basic functionalities of the website. We also use third-party cookies that help us analyze and understand how you use this website. These cookies will be stored in your browser only with your consent. You also have the option to opt-out of these cookies. But opting out of some of these cookies may affect your browsing experience.
Necessary Always Enabled
Necessary cookies are absolutely essential for the website to function properly. These cookies ensure basic functionalities and security features of the website, anonymously.
Functional
Functional cookies help to perform certain functionalities like sharing the content of the website on social media platforms, collect feedbacks, and other third-party features.
Performance
Performance cookies are used to understand and analyze the key performance indexes of the website which helps in delivering a better user experience for the visitors.
Analytics
Analytical cookies are used to understand how visitors interact with the website. These cookies help provide information on metrics the number of visitors, bounce rate, traffic source, etc.
Advertisement
Advertisement cookies are used to provide visitors with relevant ads and marketing campaigns. These cookies track visitors across websites and collect information to provide customized ads.
Others
Other uncategorized cookies are those that are being analyzed and have not been classified into a category as yet.
SAVE & ACCEPT
Powered by